My dad, Ken Bartley, passed away unexpectedly on Friday evening at 5:05 p.m. Although his passing was a surprise, it was also a blessing. He was diagnosed with alcohol related dementia in 2008. Continuing to smoke, while already having COPD, further contributed to his dementia due to low oxygen levels. The frail, confused, old man who died wasn't even a shadow of my father. For those that knew and loved him, had they the opportunity to see him in the months prior to his death, would be glad for him that he's gone. He is at peace now, restored.

During his life, Ken was a lineman for Ohio Power and Light, a salesman of material handling equipment, a licensed minister who performed marriages and baptisms, and many, many more things to many people. He found sobriety with the friends of Bill W. in the early 1990's, and devoted the rest of his life to attending meetings, speaking, and helping others. AA was his life, his family, and his purpose. Many will miss his stories, his observations, and his jokes. 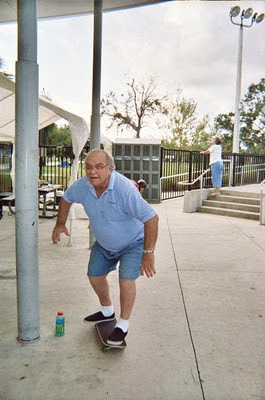 He was a Mason, a member of the Scottish Rite, and a Shriner, although those organizational memberships left his priority when he stopped drinking alcohol. And, as a young man, he served in the US Army, and attended Potomac State College prior to getting a Bachelor's degree in business at West Liberty State University.

When my children were born, Ken became PeePaw. He worshiped his grand children, Jose, Eleana, and Isabel. The photo is of PeePaw, giving it the ol' college try while Jose was in his skateboarding years!

He was married three times, to my mother for 22 years, briefly to a lady named Donna, then to the love of his life, Paula. She predeceased him in 2006. They lived for each other, and he was broken after she passed. Now, they are again united. And knowing them, they are holding hands and watching the grandkids from a comfy cloud in heaven!