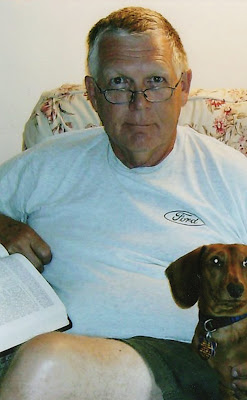 In Miamisburg, Ohio, there is a little red dachshund named Mickey with a broken heart. During the last week of Dick’s life, Mickey never left his side. He went without food and water, and watched the “daddy person” take his last breaths. Ever faithful, he stayed by him until the very end. It’s funny how our pets assume the personalities of their owners. Because “ever faithful” is an excellent choice of words to describe our beloved, departed Dick.

An ever faithful husband, Dick went to heaven first to prepare a place for his wife, June. She says that someday, when it is her time, she will now not be afraid. They met at a Christmas party in December of 1995 when Dick pretended to be Santa (with his white beard) just to be able to ask June what she wanted for Christmas. Ever faithful, when June moved to Florida to be close to her firstborn grandchild, Jose, Dick followed right after her. They married there and welcomed four more grandchildren during their years in Orlando, Eleana, Renae, Isabel, and Bailey. Dick and June’s song was Keeper of the Stars by Tracy Byrd. You can watch the song videos by clicking song titles on this page.

Ever faithful, as a father, Dick was never more proud than when his daughter, Anne, graduated from college, or when he walked her down the aisle into the arms of her husband, Rob. His step-children, Ken and Sarah, were welcome additions to his family instead of ever being just his “wife’s kids”. Before he passed, Sarah was able to tell him that the Brad Paisley song He Didn’t Have to Be always reminded her of him. 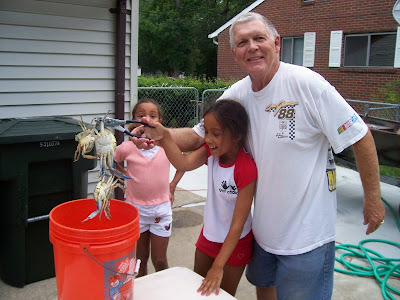 The ever faithful grandfather, Dick would dote and worry after his grandkids, but he never let them know. For them, he was always strong, and wise, and full of love and fun times. He taught his grandson how to fish, and the girls how to not be afraid of icky things like bugs and blue crabs. He shared the gift of patience, with them all, saying things like “slow down now”, or asking “what’s the rush?” Most of all, he made a point to share his faith with them. None of them will ever wonder what his spiritual beliefs were.

Dick was a son, a brother, a brother in law, an uncle, a great friend, and an ever faithful servant to his fellow man. He always offered help to anyone in need. He loved his family, his friends, and his lord, Jesus Christ. Ever faithful, he told death to wait for his sister, Ruth, and her husband, Ogie, to arrive from Florida to say good-bye - after he had already had the opportunity to do so with his mother, Dorothy, his niece, Jan, and her husband, Mike, his nephew, Jimmy, and his friend and pastor, Brad.

On Wednesday, September 7th, 2011 at 3:10 p.m. our ever faithful Dick took his last breaths with his family by his side. Then a little red dachshund named Mickey nudged his hand to try and revive him before he really accepted that Dick was gone. Mickey jumped off of the bed, and has stayed by June’s side ever since, being ever faithful, just like the “daddy person” would have wanted.

We love you Dick! We will see you on the other side! And, say hello for us to the keeper of the stars! 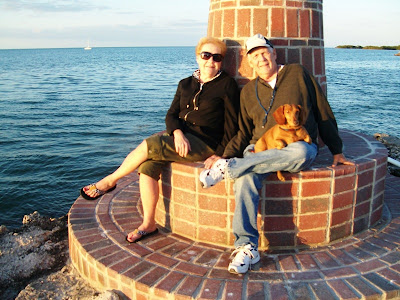 Dick was an ever faithful friend to Bobby and Me. We loved him and had adopted him to our family. Our trip to see him in August was a blessing from God. We are not able to make the trip back to Ohio from Virginia to be with you and your family at this celebration of his wonderful life, but we will be praying for you.

Dick made life a joy and was always appreciative of the joys of nature, the joys of friendship, and the joys of sharing his faith.

Bobby and I are so glad we came to see him in August. We knew he was putting out a great effort to be with us and how sick he was. His private talks with Bobby will always be a special memory.

Love in Christ to all of you

Bobby and Duke Cheely
His hunting and fishing Virginia friends

I am so sorry to hear about Dick. Please know that you are in my prayers. God Bless you.

Dearst June,
We are so sorry to hear of Dick's passing. We did not know him well, but had the privilage of meeting and having him with us one summer in Alaska. What a lovely man he was and we are grateful to have known him but for only a bit.
Our prayers and thoughts are with you.
Jim and Janie McHale
Your Alaska friends and family

Dearest June, We were so sorry to hear of Dick's passing. Reading your wonderful tribute showed just how much he was loved by all who knew him. He touched so many lives and that's all any of us can ask. Dick made his mark...
Take care June, and know that you, your family and dear little Mickey are in our prayers.
Eileen and Kevin Wilson

Dear Anne, I knew Dick from before there was you. I have always treasured knowing him and those memories. Great guy, smart and fun to be with. I know he cared about you and so many other people. You can take pride in having him as your father. May you take consolation in that. Love, hugs and kisses to you.

Dear June, We didn't know Dick well, but know he was loved by our son Rob, Anne's husband and their girls, Renea and Bailey. Our thoughts are with you.
Susan and Bill Steinberger

Allyn and I want to offer our most sincere sympathy. We were friends with Dick during all our growing up and teenage years. He was in our wedding and spent many a night at our apartment playing cards. I will miss receiving those yearly Christmas morning calls just to say hi and Merry Christmas. We are sorry we didn't get to see him during his days last week, but know Dick knew we were thinking and praying for his release. He's now talking to Jesus about all of us and asking HIM to hug and hold tight Dorothy, Anne and family and June.

June
Bonnie and I send our prayers for you and your family. Dick was a good friend and brought me closer to Christ. From all of us here at St. Marks may God bless Dennis Vipond

One day I shall reach that "Golden Shore" to be with God forever more... We all have that desire to go to Heaven one day and my dear friend Dick has now achieved that goal... I know that he did not want to leave his family and friends, but the Master of the sea called him home to a glorious celebration... Today as we say goodbye to Dick for now our hearts are heavy. But we celebrate a glad reunion day. Dick HAS MADE the journey to the loving arms of Jesus and for that I am happy and look forward to the day I meet Jesus face to face to then live forever in that great place!!! Oh praise God and rejoice today with our ever faithful Dick.........

June,
We are very sorry sorry to hear about your loss. Dick was a very special man. Please know that you are in our prayers.

June and Family, Ogie and I would like to tell about some of the things we remember about Dick growing. When he was 5, Santa brought him his first gun, it was a cork gun, but he and Dad went out hunting on a cold, snow falling Christmas Day. Dad saw a Rabbit and told Dick, lets both shoot and maybe one of us can get it. Dad said we both missed it, and Dick said he was freezing and they came back home. The next thing, he was out with Ken Johnson, Allen Beamer and they went to Ginny Wiede"s and went out in the field and Dick tore the transmission out of his car. He did*nt want Mom and Dad to know about
it. I wander why?? Ogie gave him the money and the folks did not know for a long time after that. We had alot of good times together for alot of years and Dick thought of Ogie as his big brother, which he was. We feel like Dick is now finally out of pain and probably up in Heaven with Dad and his beloved dog Sam, and they are out fishing somewhere Heavenly. Love to all. Ogie and Ruth

I remember the night of the transmission mishap and a lot of good times when we had youth but not much sense. Rest in peace, dear friend.